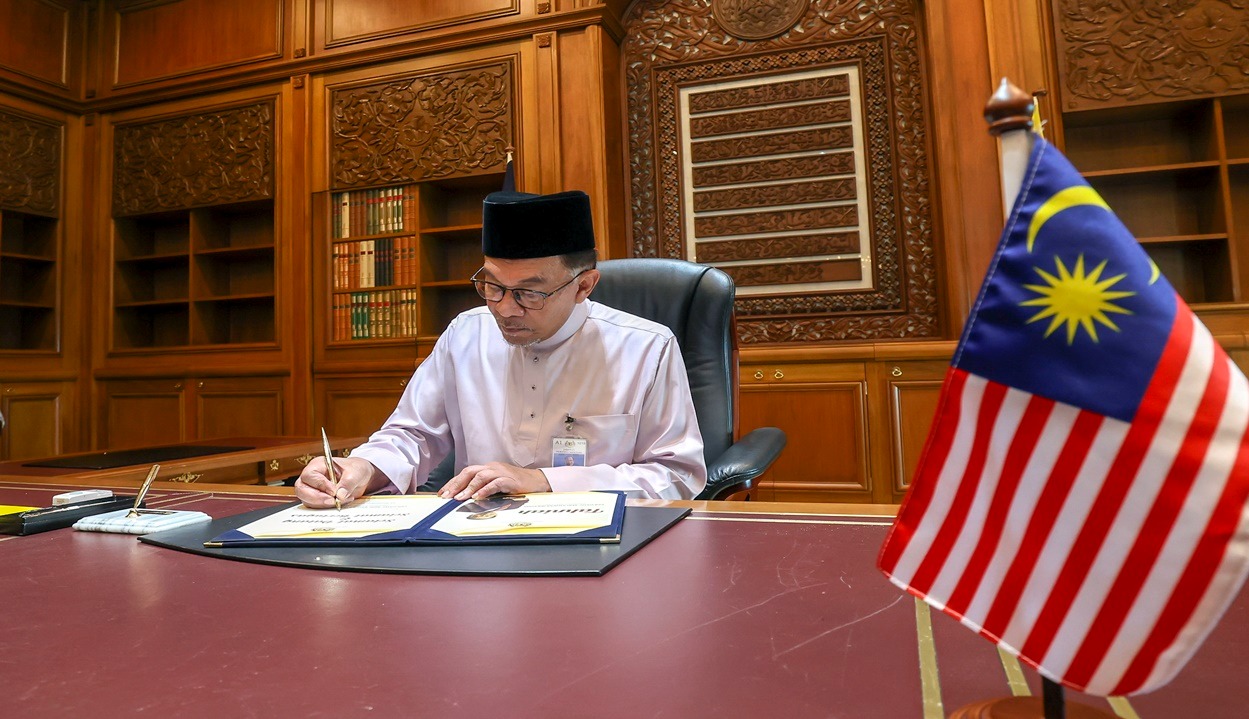 KUALA LUMPUR (Bernama) – At his inaugural media conference last night after being sworn in as the 10th Prime Minister of Malaysia, one of the first things Datuk Seri Anwar Ibrahim did was allay fears that the Malays and Islam would be sidelined under Pakatan Harapan’s (PH) rule.

The PH chairman told journalists he was committed to upholding the spirit of the Federal Constitution as well as protecting Malay rights and the status of Islam.

He also gave his assurance that the unity government led by him will uphold the position of Bahasa Melayu as the national language and the sovereignty of the Malay rulers.

Describing himself as the prime minister for all Malaysians, he pledged to safeguard the rights of all the people regardless of race and religion, promising that no community will be marginalised.

Several political observers and analysts Bernama spoke to said they were convinced the new prime minister’s undertaking to uphold the spirit of the Federal Constitution was not mere rhetoric as it was among the main points he stressed on last night.

Said political analyst Prof Dr Ahmad Martadha Mohamed: “He was not just speaking on behalf of his coalition but as the head of the (nation’s) unity government. It was interesting that he stressed on defending Malay rights and interests enshrined in the Federal Constitution because it was one of the main concerns (of the Malays) if PH comes to power.”

He told Bernama Anwar’s assurance showed he is aware that the issue (of protecting Malay rights) is key to ensuring the stability of the nation as well as his government.

At yesterday’s press conference, Anwar admitted that “people have been voicing concern, partly due to the issues played up by certain political parties during the recent election campaign”.

Ahmad Martadha agreed that the “racial situation” in the country was quite “worrying”, no thanks to the antics of some parties playing the race card to fish for votes during the run-up to the 15th general election (GE15).

Even Inspector-General of Police Tan Sri Acryl Sani Abdullah Sani was reported as saying that following GE15, the police had detected social media users uploading content insulting the royal institution as well as postings likely to cause racial or religious discord.

Ahmad Martadha, who is also the head of the Governance and Integrity Cluster of the Council of Professors at Universiti Utara Malaysia, said one of the main challenges awaiting Anwar’s unity government is strengthening national unity as studies and observations of GE15 indicated the electorate had voted along racial lines.

“Such a situation was not that evident during the previous general elections,” he pointed out.

“He was not just speaking on behalf of his coalition but as the head of the (nation’s) unity government. It was interesting that he stressed on defending Malay rights and interests enshrined in the Federal Constitution because it was one of the main concerns (of the Malays) if PH comes to power," -- Political analyst Prof Dr Ahmad Martadha Mohamed

FED UP WITH POLITICAL DRAMAS

Anwar, meanwhile, has also indicated that he is keeping the door open for other coalitions and parties, including Perikatan Nasional (PN, to join his unity government.

He said yesterday his unity government would comprise PH, Barisan Nasional (BN) and Gabungan Parti Sarawak (GPS), adding that it is also supported by Warisan, Muda and Parti Bangsa Malaysia. Earlier today, Gabungan Rakyat Sabah (GRS) announced it will also be a part of the unity government.

GE15’s outcome resulted in a hung Parliament when none of the coalitions succeeded in winning at least 112 Parliamentary seats to form a government. PH won 82 seats, followed by PN (73), BN (30), GPS (23), GRS (six) and Warisan (three). Parti Bangsa Malaysia and Parti Kesejahteraan Demokratik Malaysia won one seat each.

Geostrategist and senior fellow of the Nusantara Academy for Strategic Research Prof Dr Azmi Hassan said Anwar’s readiness to welcome the participation of all coalitions and parties in his unity government showed he is aware the rakyat is fed up with the endless political dramas of the last four years.

It also showed the prime minister is only too aware of the economic challenges awaiting the nation following the World Bank’s projection of a global recession next year, he added.

On the unity government, Azmi said PH will have to enter into a Confidence and Supply Agreement (CSA) with every coalition and party that make up the government to guarantee their cooperation and support for the national policies, including the budget, that will be enacted eventually.

“The (coalitions and) parties that form the unity government will have different ideologies and that’s why the CSA is crucial to ensure political stability and also a stable administration. We don’t want a repeat of the problems that cropped up during the previous (BN-PN) administration,” he said.

Stressing the CSA’s importance, he added that the anti-hopping law only prohibits individual elected representatives from joining another political organisation but does not stop any party from withdrawing from the government.

Azmi also said Malaysians and foreign investors are eagerly awaiting Anwar’s Cabinet line-up as they want to know if he is going to allocate ministerial posts based on qualifications or party quota.

He said even if the prime minister is given the freedom to appoint ministers as he sees fit, he should not repeat the mistake of the previous administration in “dishing out” posts to certain parties in return for their support or to fulfil their quotas.

“It’s not easy to form a unity government. It has been implemented by several countries, including the United Kingdom in 1931 when it experienced an economic downturn. Israel had a unity government in the 1980s and Italy two years ago during the COVID-19 pandemic,” he added.

EPF Withdrawals Not A Viable Solution To Cash Flow Issues – Experts
Two-third Support Vital For Anwar, Says Analyst
PN Has What It Takes To Be An Effective Opposition Bloc – Analysts