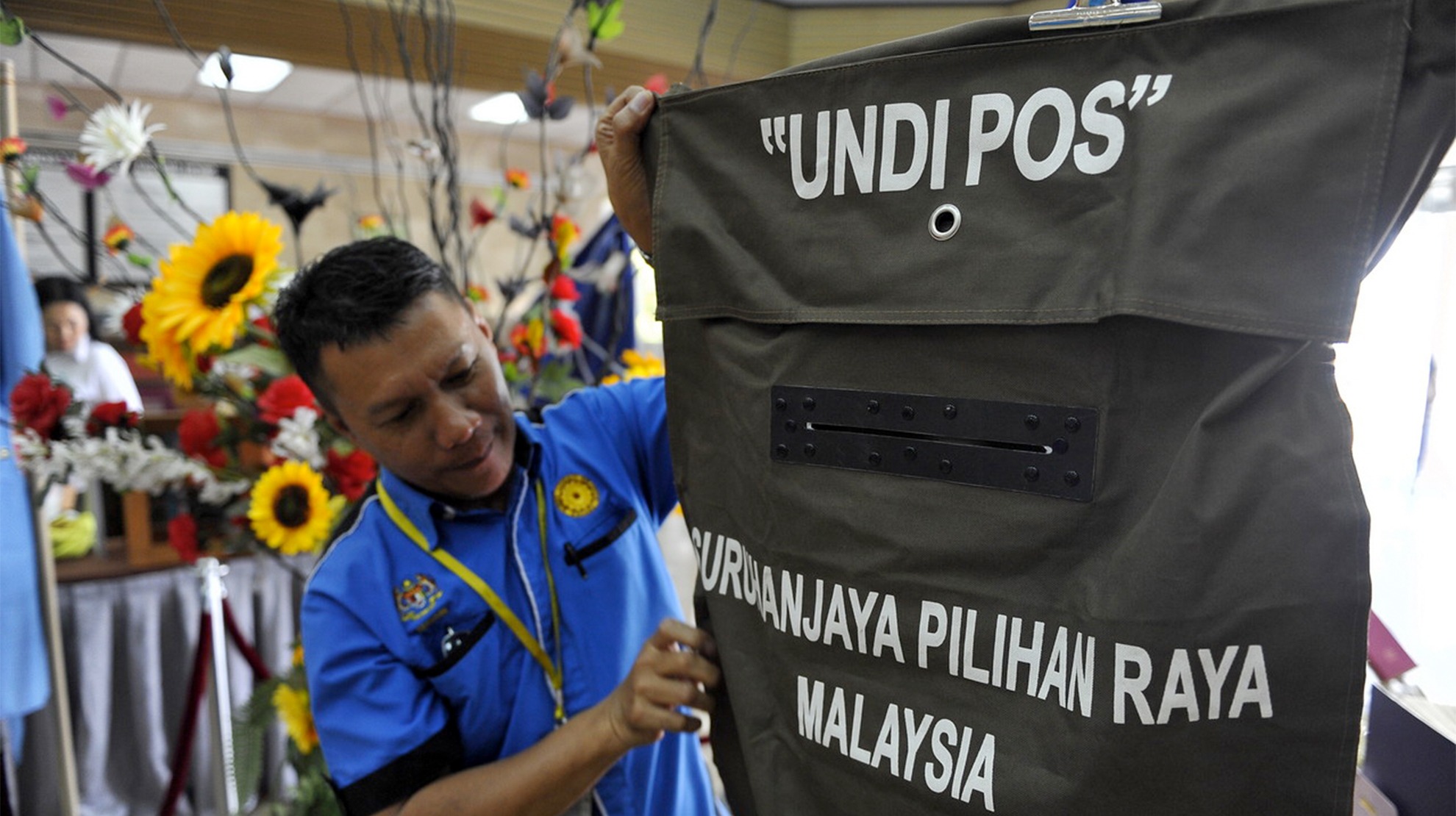 KUALA LUMPUR (Bernama) – Syakirah Anas, who lives in Qatar, was one of the lucky overseas Malaysians who managed to register to vote by post by Oct 23, the deadline for them to do so.

She managed to register herself at the last minute. Her husband, a pilot, missed the deadline, which was on Oct 23 at 11:59 pm Malaysian time, due to his work schedule. The 48-year-old mother-of-three is excited as this would be her first time voting by post, taking advantage of new voting laws that give overseas Malaysians like her a chance to vote.

But with the excitement came some anxiety.

“I am worried I won’t get my ballot on time because the Qatar post is so slow,” she told Bernama via WhatsApp.

Experts and activists say she has good reason to worry. Despite the recent expansion of voting rights for overseas Malaysians, voting by post continues to be burdensome which is unfortunate as many experts think overseas Malaysians could have a significant impact on the outcome of the 15th general election (GE15), based on the numbers.

There are about 1.86 million Malaysians living and working overseas, which is six percent of Malaysia’s total population, according to 2020 UN (United Nations) statistics. Almost one million are in Singapore alone, based on 2019 figures.

“1.86 million is almost nine percent of the total electorate and we need a high turnout for this coming election,” said Thomas Fann, chair of the voting rights group Bersih 2.0. “And the way to get a high turnout is to improve access to voting.”

While only four and a half years separate GE14 and the upcoming GE15, scheduled to be held on Nov 19, the electorate has changed much.

For one thing, new laws have expanded voting rights for Malaysians, such as lowering the voting and candidacy age to 18 and automatically enrolling every Malaysian above the age of 18 as a voter.

Other changes include removing eligibility requirements for overseas postal voters, such as allowing Malaysians in Singapore or any other nations bordering Malaysia to vote by post. Previously, Malaysians living in areas close to the country’s borders were required to return home if they wanted to vote.

Despite the expansion of rights and relaxation of requirements, postal voting remains a challenge with many predicting the numbers will unlikely reach 10 percent of total overseas Malaysians. It is still a step up from GE14, however, where only 3,653 voted by post albeit out of a smaller pool of eligible voters.

Experts and activists report disinterest, ignorance and logistical issues, as well as excitement among Malaysian voters residing overseas. Bernama contacted several Malaysians overseas and some of them said they were not aware they were eligible to vote. Once told they were, many were still not interested in voting.

“For those aged 18 to 20, maybe they will vote. But for those who are automatically registered, I think they wouldn’t be bothered (to vote). I think that is why they never bothered to register (themselves as voters before),” said Azmi Hassan, a senior fellow at Nusantara Think Tank.

He added that being overseas may also make many Malaysians feel far removed from the political instability plaguing the country.

Others are excited to vote but a few like Syakirah’s husband missed the deadline to register as a postal voter. And then, there is the logistical issue.

University of Tasmania professor of Asian Studies James Chin told Bernama the current postal voting system is too much for many voters to surmount.

“If you consider yourself Malaysian, it’s your civic duty to vote. (But) I’m just saying at the present moment, the system is too hard and too difficult. Even though Malaysians overseas are very excited about being given the opportunity to vote, the reality is the system is not delivering,” he said.

The main issue is the short time period they get to cast their vote and have their votes counted. The EC has set nomination day on Nov 5 and the ballots will only be printed with the candidates’ names and mailed out after this day.

Polling day is on Nov 19, which leaves 14 days for overseas voters to receive their ballot, choose their elected representative, find a witness for their ballot and mail it back to Malaysia. The returning officer at the relevant constituency must receive the ballot by the time polls close in order for it to be counted.

“Witnesses aren’t even the hardest part because it is likely (that) you are in a family or in a community so you might be able to get another Malaysian to witness the ballot for you. The main challenge here is the logistical part, that is getting the vote to Malaysia and ensuring every vote is counted,” said Jonathan Lee, president of the Malaysian Students' Global Alliance.

“Two months ago, Global Bersih did a small postal voting exercise, where we had people post (from) Europe and America (to Malaysia), basically sending us normal letters, and from the US, it took 18 to 21 days for a letter to arrive and for Europe, it took 15 to 18 days,” she said.

An EC official, who asked not to be named, admitted the short time period was “risky”, advising overseas voters to not delay mailing out their completed ballots. Other officials assured that their staff would be working day and night through the weekend to process the ballots.

Nirmala and other pro-democracy organisations are not risking it though. She said voters can send their ballot via express mail, which can be very expensive. Or they can give the completed ballots to volunteers who will fly home with them – the volunteers will then either mail or deliver the ballots directly to the returning officers at the relevant constituencies.

Although experts agree that overseas voters currently do not have the numbers to affect the election results significantly, they disagree on the levels of the impact.

Some experts say depending on where a postal voter is registered to vote, his or her vote could be the deciding vote or just one among hundreds of thousands. Compared to rural areas, seats in urban centres tend to have more electors packed in the voting district.

“If an 18-year-old were to vote in Bangi, his voting power is one-sixth of an 18-year-old voting in Sabak Bernam,” said Danesh Prakash Chacko, director of Tindak Malaysia.

While experts believe most overseas Malaysians are from densely populated urban centres, Nirmala said this is not necessarily true.

She said many overseas Malaysians are from rural areas, such as students and economic migrants who left Malaysia for better opportunities elsewhere.

“If a sizable number of more than 100,000 overseas Malaysians take part in postal voting, it could make a difference in marginal seats, especially for this election where we expect at least three- or four-cornered contests,” he said.

Experts and analysts of GE14 results have credited youth voters, especially students studying overseas, for breaking the stranglehold Barisan Nasional had on Malaysia. Many flew home to cast their vote in person.

However, Chin doubted overseas voters would have much impact in GE15 as in GE14.

“In the rural areas, it is very difficult (to deliver the postal votes). It’s not going to work for the overwhelming number of overseas Malaysians. No matter how many are registered, they are not going to overturn any results for any constituency in Malaysia because their numbers are not enough to overturn them,” he said.

United Kingdom-based Lee estimated about 100,000 Malaysians have registered to vote by post in GE15. For the rest, they could still fly home to vote, but the higher flight costs make it less likely.

Nevertheless, he encouraged all eligible Malaysians to vote, be it flying back home to cast a vote or turning out to vote at home.

“(Our message is) we are overseas and yet we are taking the trouble, this challenge, to make sure that our vote arrives in Malaysia and that we are heard. So should you and do the same,” he said.